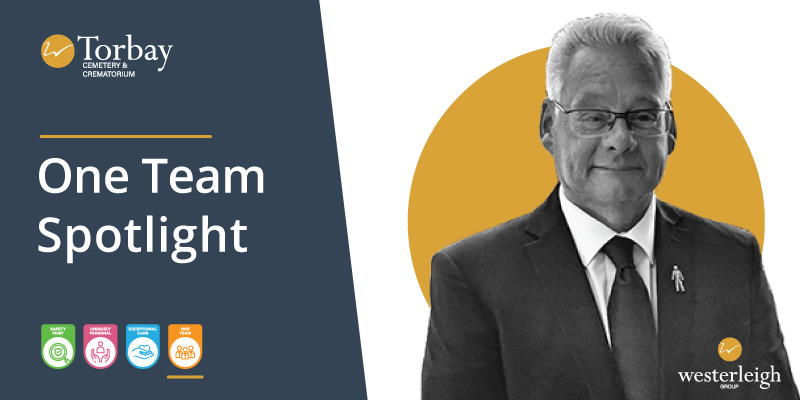 And he said he could not be more satisfied with his new role as site manager.

He said: “To be involved with such a personal time in the lives of local families, and supporting them on the day, is immensely satisfying, which is something I have craved throughout my professional life.

“I also believe Torbay Cemetery & Crematorium is an extremely important and integral part of the local community.

“I am determined to ensure that, going forward, we will engage with the community and many local projects and charities.”

Torbay Crematorium is part of Westerleigh Group, the UK’s largest owner and operator of crematoria and cemeteries, with 37 sites in England, Scotland, and Wales, all set within beautifully landscaped gardens of remembrance which provide pleasant, tranquil places for people to visit and reflect.

Stephen’s new role is his first with the company – and in this industry.

He said: “Family and friends were slightly surprised when I initially told them. However, when I explained my motivations, the caring and compassionate element of my role and the difference I can make to the local community, they understand my desire to join Westerleigh Group.

“It’s a privilege to be able to support local families, ensuring that they can say goodbye to their loved ones in a uniquely personal way.”

It’s a far cry from leaving school in 1987 to begin a YTS course in bricklaying, having been brought up to believe that learning a trade was important.

After qualifying as a bricklayer, he joined the family construction company before a career change, which saw him work as an insurance agent and district inspector.

In 1999, he began a 23-year career in the motor industry, having always had a keen interest in motorsport.

He worked his way up in the business, from a sales executive to head of business.

He said: “While I lived in Jersey, I was CEO and developed and opened a tourist attraction and franchised car dealership and petrol station called The Mansell Collection, with the 1992 Formula One World Champion Nigel Mansell.”

He left Jersey in 2017 and moved to Paignton and is now looking forward to his new role with Westerleigh Group.

He added: “I’ve always liked variety in what I do and look forward to embracing this again in my current role which will see me managing all aspects of our extensive site at Torbay which includes a crematorium and various cemeteries and churchyards.”